We hope you had a nice Christmas. We celebrated with 50 other cruisers with a potluck organized by 2 local business owners catering to cruisers. They had roasted turkeys and prepared stuffing and gravy, the cruisers brought side dishes and we had a very good Christmas meal in a beautiful shaded courtyard. We met new people and shared boat stories and all had a good time.

Before Christmas, we finished sanding and applied two coats of polyurethane on the house and cockpit. It looks very good if you do not look too close! The polyurethane was over a year past its expiration date and was more difficult to apply than we expected, probably because some component of it had leaked (as evidenced by stained cans). So the resulting surface has many bubbles and some foam spots where it was too thick. However, it is harder than varnish and we hope it will last much longer than varnish did. The work gave us both back pain and I coughed a lot as I seemed to have inhaled too much teak dust. I suddenly understood better the misery of asthma as I felt my lungs had suddenly shrunk. 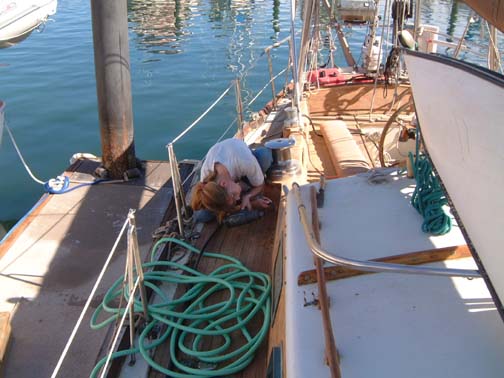 After recovering from that project, we tackled some leaks in the cockpit which allowed rainwater to drip on Clark’s bed. Clark also fixed the bicycles so we could easily ride into town to the post-office, meat market, pharmacy and our favorite restaurant which just serves slow-roasted chicken.

One evening, we took a walk to see the sunset over the hills. The walk took us through the rich neighborhood occupied largely by american and canadian expatriates and located on a hill overlooking the San Carlos harbor. 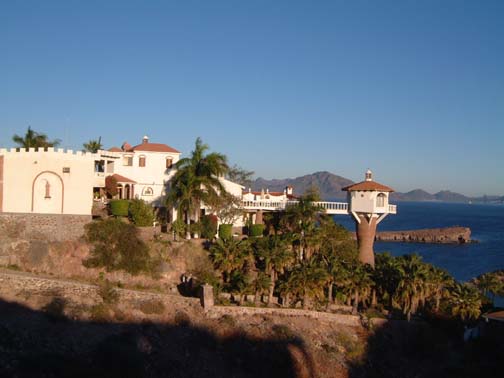 Some of the houses looked truly luxurious and other had funny decorations, such as the one we dubbed the Dairy Queen house after the famous soft ice cream chain in the US. 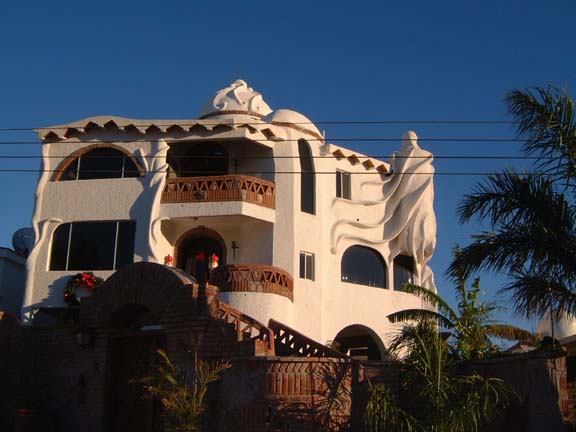 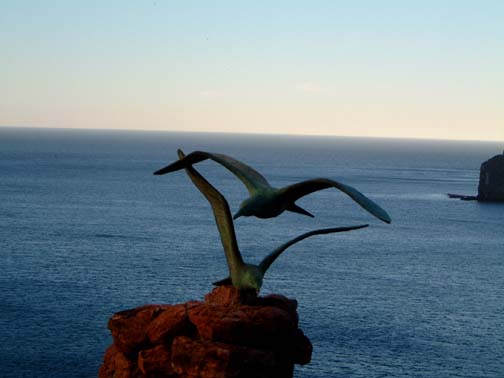 The setting sun created a rich glow over the water that looked like a island of gold: the lost eldorado! 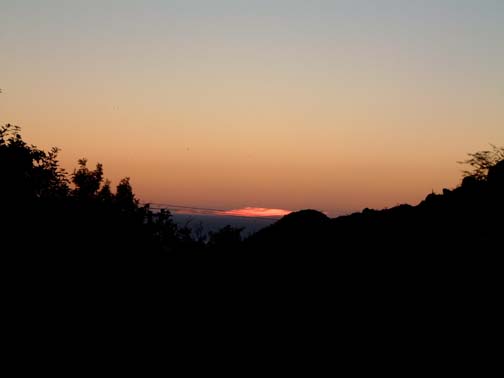 It is a little cold here when the wind picks up, so we are looking forward to move south once we finish a few more projects on the boat and after we receive mail and deliveries from cruisers coming back from the US in January.

We hope you are all enjoying the holidays. 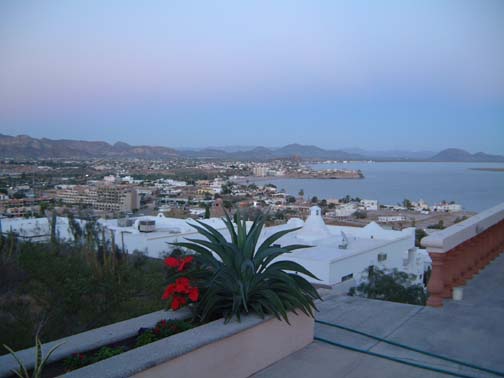 We came back from Copper Canyon on December 4, to find that the boatyard had started a little late on sanding the bottom of Temptress, so that they would not be done for another 2 days. So we caught up with email, wrote Christmas cards and read books until December 8, not wanting to get covered with copper laden red dust in the boatyard.

That Friday, Clark inspected and filled with epoxy all the cracks in the old gelcoat while I started removing varnish from the house (the part with windows protruding from the deck). Saturday, the boatyard workers were then supposed to apply the bottom paint…but since they did not know which color it was supposed to be and the manager was out, they abandoned the job. When we arrived later that morning and asked what was happening, they scrambled to find the paint but it was too late to apply the 2 coats that day and they decided to do it on Monday.

So we worked on getting the boat ready: we took mainsail and staysail out of the cabin where they prevented access to everything and re mounted them on their booms. Clark mounted the new water pump on the engine. I unpacked our luggage. And we continued removing varnish with a heat gun borrowed from friends since we could not find chemical strippers in the stores. It is a very tedious job: heating the varnish to soften it and separate it from the wood and then scraping it off, without putting burn marks or scratches on the wood. I (Birgitta) was getting very sore and tired of it but was still determined to get both the house and the cockpit done as the varnish was damaged and I wanted to switch to a modern polyurethane product. Clark, very sensibly, suggested doing only the house this year but I was stubborn and suggested hiring a local to finish the varnish removal. Clark was no enthusiastic, given his bad experiences in the past with hired help, but let me try it. So Cesar was hired. He did do about a day’s work when his heat gun broke and he gave up. He did not seem to enjoy the work much and did not offer to come back. He also did not think the varnish needed to be removed from all the undersides of the wood where no one could see it! Overall, it was disappointing, I hate bargaining and did not negotiate the best price for the amount of work he did, but he did make enough progress that what remained did not seem as daunting anymore. Other cruisers had less luck, hired help gouged the rudder, installed through hulls backwards and didn’t even fill all his screw holes or tighten his screws so the boat leaked when it was put back into the water.

Monday the paint was applied, Tuesday the boat was launched. It was a moment full of anxiety: would the engine start so we could go to our slip in the marina under our own power? Would anything leak after 4 months in the dry storage? We had noticed that doors did not quite open the way they used too and some seams in the house had cracked open due to the unusual strains in the boatyard and the heat. The engine started and only one small fitting gave and had to be replaced.

That evening, after going out to a restaurant with friends, Clark became sick: Montezuma’s revanche striking again! After a diet of yogurt, he has now recovered. I finished removing varnish and we are currently sanding to eliminate most varnish residue, scrapes and burns mark, and ensure the surfaces are smooth. The polyurethane is supposed to be easier to apply then varnish and require much less maintenance. I hope it is true! We hope you are all doing well

January 15, 2001. La Cruz, Mexico. Sunny.85F/29C at 2PM central time.
Last Thursday we had a wonderful turkey diner on Long Tall Sally. Penny and Greg were sick at Thanksgiving and had kept their 12 lb turkey in their freezer (Long Tall Sally is a modern Tayana 55 with lots of luxuries aboard including the large freezer and microwave). They invited us and two other couples to share it and we had a delicious traditional meal with a tender turkey and all the trimmings. Unfortunately, Clark got very sick that night (we do not know the cause) and has been recovering very slowly. Yesterday, we went into town to get some groceries and he collapsed on the couch when we came back. It had taken all his energy for the day, but at least he is eating normally again. 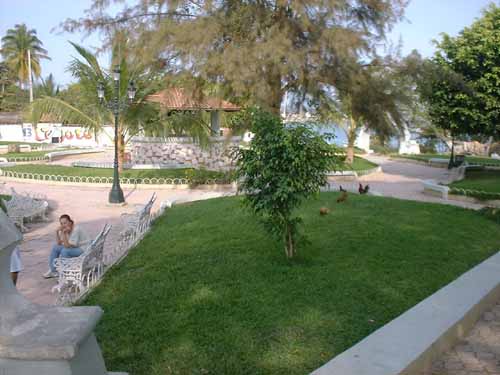 Although I have not had digestive problems myself, I believe I am suffering from side-effects from the anti-malarial drug we took in Chacala: mild headache and slight nausea. It is a drug you have to take once a week, which, I assume, means it will stay in my blood at least a week. I would rather avoid malaria-prone areas in the future than having to take it again.
So, we have spent the last few days resting on the boat, mostly reading books and listening to music. We read everything from classics to fast-reading best sellers and obscure novels picked up in a used-book bookstore. I liked “Smoke” from Turgenev and “Out of Africa” by Isak Dinesen but felt that “A Pilot’s Wife” from Anita Shreve was too melodramatic. I also read “The Book of Ebenezer Le Page” from G.B. Edwards and liked the last chapter best, the one the editor says should not have been included because it is too sentimental compared to the rest of the book! Clark is saying that he would not want any of Hemingway’s characters (The Sun Also Rises) to be is friends…
Clark’s parents are arriving on February 7 in Puerto Vallarta which is in the same bay as La Cruz, so we plan to stay around here for quite a while. La Cruz itself is a small village but it has the quietest anchorage in the bay, with plenty of room. It does not have a supermarket so we get to learn to shop in small Mexican grocery stores which carry a limited range of supplies. The tomatoes and avocados are very cheap and delicious but the Mexican zucchini is terribly bland. I guess that is what the ubiquitous hot peppers are for.
We get to see plenty of wildlife between the dolphins playing between the anchored boats and the boobies and pelicans diving for fish. Fish like to hide under and in the shadow of the boat, which means that heavy pelicans often hit the water at full speed right next to the hull, creating a sound like a depth charge next to the boat. We are getting used to it!
Hope all is well with you. 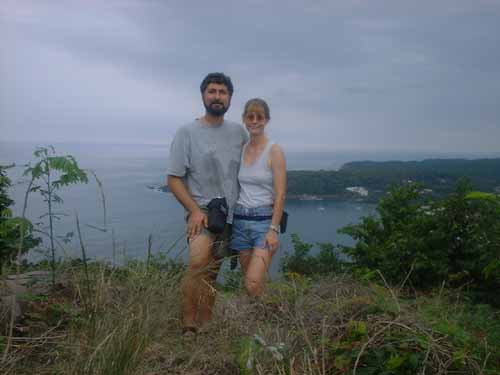 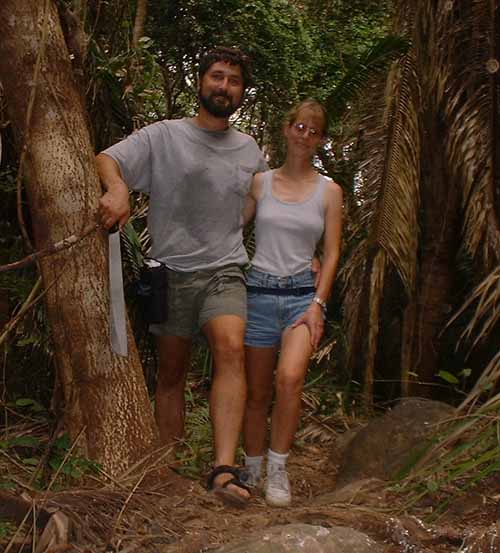 That night was a rough in the anchorage. The wind came from the south that night and the waves came up. We had a bumpy ride throughout the night and didn’t get a good nights sleep. As a front was expected through this week we decided to change our plans of staying in the area for a week and moved down to Banderas Bay right away.
We motored with a bit of help from the genoa for the whole 50 miles or so. I guess I’m just getting lazy as we usually sail if at all possible. We didn’t expect there to be any wind so we didn’t really clear decks very well and didn’t even remove the main cover. We motored for the first third of the trip in almost no wind. Then the wind picked up just a bit so we rolled the genoa out and slowed the engine for some motor sailing. I should have raised the main and killed the engine but we were going to turn into the bay of Banderas in about 2 hours so “why bother” I figured. I expected no wind in the bay. Around the point into the bay saw lots of good sailing wind but again “why bother now” as it was only another 2 hours to our anchorage. We had some close encounters with humpback whales along the way. Looking forward to getting the 35mm film developed in PV soon. I think we got some good shots with the long lens.
During the trip we caught 2 common jacks and 2 black skipjacks but as we don’t like these fishes we threw them all back. Right after we arrived in La Cruz in Banderas Bay we heard about a BBQ Party in town that night. So, though we were still tired, we went in and had a nice time chatting with the other cruisers. This morning we went through the hassle of checking in to the port captain. Added to the useless bother one must go through whenever a cruiser arrives or leaves a harbor, as of January 1st, we now get the pleasure of paying $15US, or so, to do it. Mexico really does everything you could imagine to get money from visitors. I expect it will cost us over $1000US per year just in fees, licenses and visas.